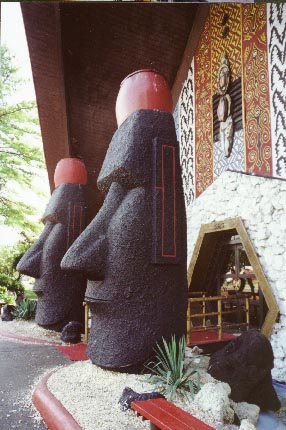 Kahiki
"This is your captain speaking, we are showing an error message on our number two engine, and we're going to try shutting it down and re-starting, we hope that will clear it up" Hope? Jesus! The effect of the double rum and kahlua I had at the airport bar was wearing off two soon. Sure, when I get an error message on my computer, I don't hesitate to restart in hopes that it will clear up. Then again, I don't count on my computer to safely carry me a couple thousand miles, 37,000 feet in the air. We were on our way to the closing party for the Kahiki, and other than a bad engine and our flight being an hour late, it was going well. They began serving drinks, and I took full advantage. The scenery from that high was pretty bleak. The view was made up of huge expanses of brown nothing, broken only by roads to more nothing, eventually twisting away and drying up like earthworms after a rain storm. I looked out under the wing, and my thoughts drifted. My first time on an airplane, I was just a kid. I had the window seat, and I remember being fascinated by the way the jet exhaust made the landscape seem liquid. Well, up to the point when the engine burst into flames and they shut it down. My mom chugged her cocktail, my cousin assured us that we could fly with one engine, and I said something like, "That was cool!". Ah, youth. But today's plane ride was less exciting. Our engine re-started, and we arrived in Columbus with no further problems. We slept, we ate, we saw the sights. At one point, as we wandered through a "story book" park down town by the river, a magic gnome tried to reveal to us some secrets of this mystical garden, but as we got closer, it turned out to be a drunken midget shouting "You gotta start over there to read the f**king story right" then he ran after some other tourists, shouting at them "Gimmie a dollar!". So, figuring we probably weren't going to get three wishes, we headed back to the hotel, where we began getting ready. We caught a taxi to the evenings festivities, and stepped into line as cameras rolled, and flash bulbs popped. We were greeted and presented with leis, and then with a nod of respect to the flame crowned giant Moai, we crossed the bridge into the indoor evening of the Kahiki. From that point on, hours seemed like minutes as they whirled by in a haze of Cocktails, Music, Food and Friends, old and new, some of which I was meeting in-person for the first time, but all of which were top notch. The next morning as I sipped my hotel coffee from a souvenir Tiki Mug, I mused over our time at the Kahiki, and decided that if that gnome had indeed been magic, I would have wished for the night we just had. Photos from the Kahiki
Next Rambling...or... Back to the Rambling menu
<